PONCH FENWICK was born in Washington D.C. and lived in Maryland. A longtime fan of sci-fi, horror, and fantasy, Ponch was a creative influence throughout his life. He spent 10 years in the military as an Intelligence Analyst and lived in Florida, Kansas, Indiana, and Arizona.

He was the Technical Liaison Committee Head for Shore Leave Convention held in Hunt Valley, Maryland. In 1992, he became enthralled with Lightwave 3D and learned the program inside and out, completely self taught over the next 9 years. In 2001, Ponch created a first-place winning image for the Farpoint Convention’s art show. The piece, entitled “It’s A Good Day,” depicts three Klingon K’t’inga Class Warships in space. Ponch was also a Lifetime Member of the Farpoint SF Convention.

Ponch continued to expand his artwork and created over 150+ images from Star Trek, Babylon 5, Lost In Space,  Dr. Who, Firefly, 2001: A Space Odyssey, and more. His artwork was featured in the Harford County Cultural Arts Board’s venue for the month of July 2017. The “Art Without Boundries” display included two of his pieces.

Ponch created book covers for authors such as Phil Giunta and Steven H. Wilson. One such cover is from Steven’s second Arbiter Chronicles novel, Unfriendly Persuasion  (pictured below).

Fandom was left with a broken heart and an immeasurable void when Ponch passed away in March 2020. 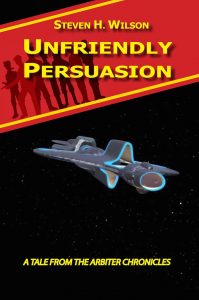