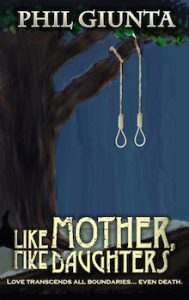 Each week during our Kickstarter campaign, we will post updates from the project, including story excerpts from both novellas. This week, we present the second part of the opening to Phil Giunta’s novella, LIKE MOTHER, LIKE DAUGHTERS. Next week, we’ll bring you scenes from Steven H. Wilson’s vampire tale, FREEDOM’S BLOOD.

We appreciate your support and hope you enjoy these story samples!

Miranda sighed as she gazed down the empty hallway. She called out to Andrea and Wendy, but there was no response—which only meant one thing. “These kids have no damn patience.”

Carefully pushing aside a haphazard stack of notepads and index cards, Miranda placed her laptop and mini-DV camera on Wendy’s desk. She made her way toward the back door, hoping that the girls were merely waiting outside.

Miranda threw open the storm door and bolted across the yard. “Andrea!”

She stepped on something solid that rolled under her foot, sending her stumbling forward. Snow-patched earth rose up to meet her. Miranda yelped as her chest landed squarely on another piece of firewood. She pushed herself up just enough to slide it out from beneath her and push it away.

“I’m here,” Miranda croaked. Wincing against the pain, she rolled onto her side and wrapped her arms around her chest, forcing her breaths into a calm rhythm.

When she opened her eyes again, two people stood above her a few feet away. The closest was a tall, stocky man wearing a leather jacket and baseball cap. He turned away just as Miranda gazed up at him, making it impossible to see his face. The girl, however, was unmistakable.

She cradled a few pieces of firewood in her arms as she stared wide-eyed at the man who was shouting at her. He was young, judging by his voice.

“I’m not talking to you about this.” Wendy held up a hand as she sidestepped him and made her way toward the house. “Just get the fuck out of here, before I call the—”

“Lying whore!” In a blur of motion, the man grabbed her arm and jerked her backward toward him. He brought his other hand up to her chest and shoved her effortlessly into the rack of firewood, knocking several pieces to the ground.

Miranda reached out to the chain link fence and pulled herself to her knees, all concern for herself forgotten. No one turned to look at her. This was a vision of events that must have occurred shortly before Miranda and her daughter arrived.

Wendy cried out as she crumpled to the ground. The young man moved in and grabbed her by the hair. She picked up a hefty piece of firewood and swung, but he anticipated her. He caught it easily and yanked it from her grasp, then raised it above his head. “You’re not calling anyone, bitch.”

“Oh, God, no…” Miranda could only watch in disgust as he clubbed Wendy in the stomach. She groaned and doubled over, but that wasn’t enough for him. He continued his assault, beating her in the back of the head even after she collapsed into the snow. He stopped only when her body began twitching.

Seconds later, that stopped too.

Still on her knees, Miranda leaned forward, holding onto the fence for support. She wanted to vomit.

The man tossed the firewood aside. It landed exactly where Miranda had tripped. Despite the pain in her chest, she forced herself to her feet and spoke through gritted teeth. “You son of a bitch.”

He lifted Wendy over his shoulder and carried her out through the fence and into the woods. Miranda watched until they vanished into the darkness.

Wendy’s words from earlier came back to her. You need to be here. Tonight of all nights, I need your help.

“Andrea!” After following what she hoped was the right path through the woods, Miranda spotted the boots first. She slid to a halt in the snow and traced her flashlight along the body. Wendy’s face was obscured by her thick mane of saffron hair, made crimson by congealing blood.

Andrea knelt over her friend. She looked up at Miranda. Her mouth hung open in confusion and horror. Tears fell from her face. “Where the hell were you? I was calling for you!” Struggling to catch her breath, she held out her hands above Wendy’s prone form. “She’s…”

As Andrea broke down into quiet sobs, Miranda moved beside her and took her into her arms. “Honey, I’m so sorry. I would’ve been here sooner, but when I stepped outside, I… I had a vision of what happened.”

Her daughter pulled back. “Tell me.”

Miranda wiped the tears from Andrea’s face. “It can wait. We need to—”

Miranda hesitated. “The guy driving that truck killed Wendy in her backyard and dumped her out here just before we showed up. Problem was, it was too dark to see his face.”

Andrea fell silent as she began to tremble, eyes wide. Miranda could only watch helplessly as cruel realization seized her daughter. “That means we were talking to her ghost the entire time?”

“That would explain a lot, like why I felt such heightened stress and fear when we first arrived, and why Wendy was so cold to the touch.”

Miranda remained silent as Andrea stood and turned away. She leaned against a tree until she regained her composure. “At first, I thought she just tripped and fell, but I would have heard that. Then I saw the blood on her head… and she wasn’t moving and…” Andrea doubled over, gritting her teeth. “Damn it.”

Finally, she stood and ran a sleeve across her eyes. “We saw the orbs. Wendy said they were there for her.”

“It’s possible. They could have been the souls of just about anybody who lost their lives in these woods. Maybe they were here to shepherd Wendy to the next life, I don’t know.” Miranda glanced at the sky, but saw only the stars. “I really wish you’d waited for me before venturing out here.”

“You’re going to start on me now? It’s not like I was expecting this to happen.”

“Exactly. You’re not experienced with the paranormal and even if you were, investigators should never go anywhere alone because you never know what to expect. You’ve heard me say that more than once when I bring new members onto my team. At minimum, we work in pairs.”

“I can handle myself, and Wendy was with me… sort of.”

Miranda held up a hand. “We’ll talk about this later. Right now, we need to go inside, put the equipment back in the car, and call the cops.”

Andrea shook her head. “I’m not leaving her.”

“You don’t have to. I’ll go to the house and call from the landline. There’s no cell signal out here.”

“What are we going to tell them?”

“Well, they’re not likely to believe that her ghost led you to her body. It’s probably better to say that the house was wide open when we got here. We noticed the firewood in disarray and the back gate open so we went looking for her.”

“And tell them about Ross.”

“We’ll tell them about the truck.”

Mother and daughter shared another embrace before Miranda started back toward the house.

Andrea dropped to her knees and closed her eyes. “I’m so sorry we were late. Please forgive me. It was my fault we got lost. I’m sorry.” After a silent prayer, she opened her eyes and reeled back as a bluish-white sphere, no larger than a child’s fist, hovered over Wendy’s body.

“Wendy?” Andrea slowly reached out, but before she could touch it, the orb floated skyward and eventually joined two others that materialized above the trees. After a few seconds, all three faded into the night.

Four hours later, Wendy’s body had been removed and the property cordoned off with caution tape. In the backyard, the cops had found blood on a loose piece of firewood. It had been bagged as evidence. In the living room, Miranda sat with one arm firmly at her side and the other around her daughter. In keeping her hands away from her head, she hoped to stifle her hair-twirling habit in front of the sheriff as he reviewed their statements.

Finally, the sheriff nodded grimly and closed his notepad. “Well, thank you both for your help. We’ll contact her family tonight. I’ll be in touch if I have more questions.”

“Absolutely.” Miranda and her daughter rose from the sofa. “Whatever we can do, please let us know.”

“Actually, sir,” Andrea spoke up in a timorous voice. “Before we leave, would you mind if we feed her cats?”

“Unfortunately, ma’am, this is a crime scene now. I’m not supposed to let you touch anything,” the sheriff tapped his notepad against his other hand, “but you ladies don’t seem like killers to me. Just make it quick. I need to go talk to my deputy. I’ll be back in a few minutes to escort you out and lock up.”

In the kitchen, the women kept their voices low as they filled food and water bowls and cleaned litter pans.

“You didn’t tell him about your vision in the backyard,” Andrea said.

“That would only have complicated things. Besides, I didn’t see the guy’s face. We told the sheriff about the truck. They found the firewood. Let them do their jobs. I’m more concerned about you right now.”

If you only knew… “I’ll be all right. I just need time, and I think I owe you an apology.”

Her mother frowned. “For what, sweetie?”

“All these years listening to your ghost stories, I never really knew whether to believe you or not.”

“Oh, I know, and now that you’ve had your own experience, you’re finally convinced that your mom isn’t an embarrassing whack-job.”

“If the spirits know you can see them, more will come. Most will be like Wendy, innocent lost souls just looking for help.”

The sheriff stepped through the front door.

“We’ll talk more about it later.”

“Do you think I’ll see her again?” Andrea whispered.

As if in response, a single, gentle strum startled both women. They turned to look at the guitar in the far corner of the living room. Even the sheriff was startled.

“I think you just got your answer.”

Read the full story in FREEDOM’S BLOOD / LIKE MOTHER, LIKE DAUGHTERS coming in November 2018 from Firebringer Press. Donate to the Kickstarter now!