We’re always grateful for the support of our readers and are thrilled when you come back time and again to buy our latest releases whether online or at conventions and library events.
We would like to ask a favor. We’re looking for more reviews for our books, especially on Amazon. Whether good, bad, or “just okay” as long as they’re honest, it would be an immense help to us. You see, once a book reaches 50 reviews, Amazon helps to promote the book by giving it more exposure on their site. Thus, reviews are critical to an author’s career.
We deeply appreciate the reviews we’ve received so far. The overwhelming majority of them have been effusive. We also know you’re busy, so even just a one-line or two-line comment would be wonderful. If you want to go into detail about why you liked the book, even better!
So whether it was Steve Wilson’s Arbiter Chronicles or Peace Lords of the Red Planet, Phil Giunta’s Testing the Prisoner or By Your Side, Heroic Park by Lance Woods, Diane Baron’s Gal Wonder or The Fandom Fifty, Firebringer Take Two by Phil and Steve, or our Middle of Eternity anthologies, we would love to hear from you on Amazon.
Thank you again for supporting small press authors!

Each week during our Kickstarter campaign, we will bring you updates from the project, including excerpts from both novellas. For the past three weeks, we presented the opening scenes from Phil Giunta’s novella, LIKE MOTHER, LIKE DAUGHTERS, and Steven H. Wilson’s vampire tale, FREEDOM’S BLOOD.

One of the books we’re including in some of our Kickstarter reward levels is Phil Giunta’s paranormal mystery novel, By Your Side, published in 2013.  This story marked the second appearance of psychic-medium and single-mom Miranda Lorensen, introduced to readers as a secondary character in Phil’s first novel, Testing the Prisoner.

As with Like Mother, Like Daughters, Miranda is front and center as the protagonist in By Your Side.

While haunted by visions of her brother’s suicide, Miranda is called to Lancaster, Pennsylvania to investigate a series of bizarre deaths–some of which are also suicides. Miranda and her team of paranormal investigators quickly find themselves confronted by a vengeful spirit awakened thirty-three years after a bloody family tragedy. Miranda realizes that only she can stop the entity before it claims its final victims, but will her obsession for saving lives redeem her for the brother she failed?

Below is an excerpt from By Your Side. We hope you enjoy these story samples and deeply appreciate your support for small press authors!

By Your Side (Excerpt)
Phil Giunta

Three hours later, after her guests had departed, Miranda rinsed off the last plate and slipped it into the dishwasher. After pouring detergent into the dispenser, she closed the door and noticed a blurred reflection in the stainless steel door. It moved from left to right before coming to a stop in her peripheral vision. It made no sound as it moved on the tiled floor of her kitchen, which suddenly became cold under Miranda’s bare feet.

She ignored the presence at first, continuing with her chores. She had learned years ago not to be frightened by the sudden appearance of spectral visitors nor would she simply drop everything to attend to them. Death should not give license to be discourteous. Miranda wanted to help them, of course, but she would not allow them to disrupt her life either. She was a single parent with three children, a career, and a home to maintain. These were her priorities.

Still, the kids were away for now and if this gentle presence was the little girls she’d seen earlier this evening, then Miranda was all too happy to give them her attention despite the late hour.   She dried her hands with paper towel as she turned to address her guest.

Miranda froze. She felt her heart leap. The tall, gaunt man who stood before her was someone she hadn’t seen in twelve years, since the birth of her twin boys. Before that, it had been the birth of her daughter. He hadn’t come to her wedding. Miranda’s mother had joked that he probably didn’t approve of Brian.

Miranda struggled to find words, but all she could think to say was, “You haven’t called me that since I was eight.”

Her father shrugged. “I miss my little girl.”

“The kids are safe with Brian. Nothing to worry about. He’s a good father.”

“Yeah, he is.” Miranda nodded. It occurred to her that he looked exactly as he had the last two times he appeared, as he had in the months before his emphysema—healthy and robust—and only a few years older than Miranda was now. He was clean shaven and his light brown hair was spiked as it had been since his days in the Marines.

“How are you?” Miranda asked.

“I’ve been having visions of Colin.”

“How can I? He took his own life, and I could have saved him if—”

“Depression took him. It wasn’t his fault.”

“Guilt is what you’re having. Needless guilt. Let go, Randy. Give him peace.”

Miranda felt tears welling up in her eyes as her father continued. “I know what you’re about to do. You’re going to help those people that your friend called about, but you don’t realize how dangerous it is.”

“My ability is dangerous in and of itself. I never know who’s going to show up or when. The things I’ve seen…” Miranda trailed off. It had always been pointless to argue with him. “If I can’t help people what is the point of it all?”

“You can’t save the world, Randy.”

The tears were running down her face now. “We’ve both seen the cost of not trying.”

Her father shook his head. “You didn’t know the depth of your brother’s depression. No one in the family really understood it.”

“You did. If you could come here tonight to warn me about going to Lancaster, you could have warned me about Colin.” Miranda turned away and reached for a piece of paper towel to dry her eyes. “I could have helped him.”

She crossed her arms and glared at her father, but he was gone. “I could have saved him,” she whispered.

By Your Side is available in eBook and paperback from most online booksellers, but you can also obtain a copy by donating to our Kickstarter campaign for our double horror novel, FREEDOM’S BLOOD by Steven H. Wilson & LIKE MOTHER, LIKE DAUGHTERS by Phil Giunta coming in November 2018 from Firebringer Press. Donate to the Kickstarter now!

Coming November 2018: LIKE MOTHER, LIKE DAUGHTERS by Phil Giunta and FREEDOM’S BLOOD by Steven H. Wilson together in one volume. We intend to launch the book at Philcon (The Philadelphia Science Fiction Convention) in November. Look for the Kickstarter in the coming weeks.

LIKE MOTHER, LIKE DAUGHTERS is the third installment in the adventures of psychic medium single mom, Miranda Lorensen (TESTING THE PRISONER, BY YOUR SIDE). This time, she’s bringing her daughter.

After Andrea Lorensen’s lover is found murdered during a paranormal investigation, she is determined to find the killer—with some help from her lover’s ghost. Meanwhile, her mother Miranda travels to Salem, Massachusetts where she reunites with the spirit of a young woman executed for witchcraft in 1692. This time, however, the encounter reveals an astonishing truth about Miranda’s past life—a truth that could kill her.

You’re a vampire, but you have an unyielding belief in the sanctity of the individual’s rights. How do you survive, if you can’t take blood without permission? And what do you do when someone offers you his blood… with strings attached? This humorous tale explores the ethics of being a vampire—or even just a creature that’s gotta eat—against the background of a developing America. Starting out in Colonial Maryland and carrying on through the 21st Century, FREEDOM’S BLOOD will perhaps amuse, perhaps enrage, and will certainly introduce you to a vampire like none you’ve ever encountered.

We’re proud to reveal two of the three covers for our upcoming books.

We’re working on the cover for Steven H. Wilson’s vampire novella, Freedom’s Blood, which will be paired with Phil’s novella in the format of the ACE Doubles from the 1950s through the 1970s. We look forward to going retro!  Look for the Kickstarter campaign to begin soon. We’re currently looking at a fall 2018 release. 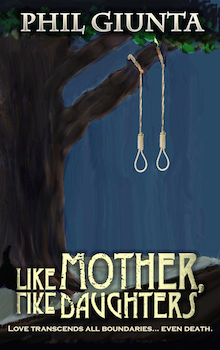 We also have fantastic cover by Allentown, PA artist Michael Riehl for Meanwhile in the Middle of Eternity, the third volume in our Middle of Eternity speculative fiction series that we hope to release in early 2019.

Ah, our first blog post on our new website and we’re excited to have you with us!  We hope you’ll take the time to peruse our available titles and get to know our brilliant authors and artists.

Phil and Steve are planning to release a double horror novel (two books in one) that will combine a vampire novella by Steve called Freedom’s Blood and a paranormal mystery novella by Phil called Like Mother, Like Daughters starring psychic-medium single mom Miranda Lorensen, who has drawn quite a following since her debut in Testing the Prisoner and further adventures in By Your Side. This book will be in the format of the old ACE Doubles where you read one story, then flip the book over to read the other.

We could not be more fired up about our new look and our upcoming releases. Stay tuned as we bring you more news in the coming weeks and thank you for supporting small press authors!